A journey through time and space

The interior of the museum is organized around the contrast between a certain «poverty» of the Churches of the Reformation in terms of objects, images, colors, traces and the bias of a permanent exhibition that favors warm colors, staging, the exaltation of rare pieces, a chair of the Desert, a silk thesis, missionary piggy banks, a Hebrew game.

The museum is a journey that holds far more surprises than one might expect, including because it leads, according to the centuries, to Geneva, Europe and North America (with the diaspora of refugees), Africa as well as Madagascar (at the time of foreign missions).

The major dates here have their own accent, whether it is the edict of Nantes, the century of Louis XIV, the Revolution, the secular Republic, the 1940s

The journey of the museum is at the same time a pier, a cruise (with about twenty stops!), a series of lights in the distance

The monumental access ramp symbolizes this ; the Ferrières team wishes a good crossing, fully historical and secular, to all. With this hope, or certainty, as a guide : knowing one’s past and that of the other is one of the best ways to learn to live together.

A brochure describing the permanent exhibition is on sale at the reception. 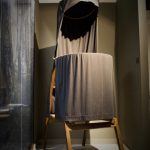 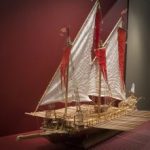